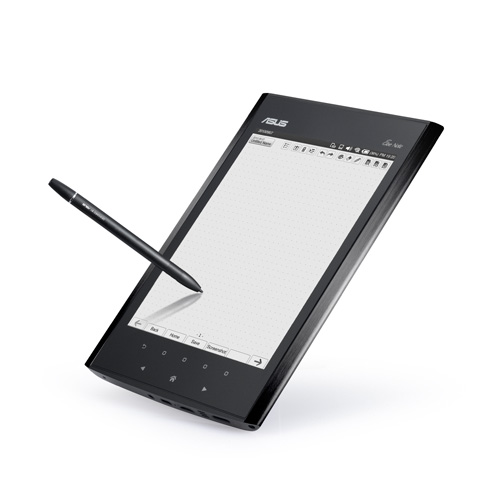 I'm sitting writing this review on a peculiar small A5 not-a-tablet-PC which I'm starting to use more and more as my general all-purpose notebook.  How did such a thing come about?  Dear reader, read on .....

I've been using an HP Tx2500 series tablet PC for some years, both for drawing and writing.  Writing, because I prefer to write longhand, whether it be creative writing (very seldom!) or simply writing an occasional journal - the 'morning pages' which I got into the habit of writing as a result of working my way through Julia Cameron's "The Artist's Way", and am still sometimes keeping up today.  For me, writing longhand has the distinct advantage of giving me time to think - it stops my mind rushing ahead as it is wont to do when typing.

Drawing works well for me on a tablet because of three things - firstly because of the excellent software available which emulates the traditional media I prefer to use. (Yes, I know that sounds counter-intuitive, but bear with me!). my favorite program at the moment is ArtRage but I've tried other similar packages, and they're all pretty good.  The second two reasons are linked  - one, I can try out a multitude of different experiments without feeling guilty about wasting reams of paper, and two, I can endlessly correct, refine, and revise whatever it is I'm working on until I'm happy with it.  For both writing and drawing, the main advantage of digital over paper is the knowledge that everything is backed up, and all in one easily accessible place, not in a box full of random papers in a cupboard somewhere.

So, why am I writing a review of a little machine which is decidedly NOT a tablet PC? Well, despite all the advantages of the tablet PC hard- and software noted above, there are also distinct dis-advantages. Firstly, size and weight - the 'first generation' HP tablet I'm using is not by any stretch of the imagination light or slim. It generates a fair amount of heat, and most of all, the battery life is at best a couple of hours. Lastly, the backlit LCD screen is more or less invisible in daylight, so I can say goodbye to any thought of sitting sketching away outside my favorite cafe.

So, in the ideal world, someone would invent a thin, lightweight, A4 sized 'notepad' with a nice colour screen and decent battery life which runs my favorite art software.  Oh, but wait, there's this thing called the 'iPad', right?  That would be ideal, especially as the makers of ArtRage have already ported their software to it....  Well, as it turns out, no.  Major problem - the iPad does NOT have a pressure-sensitive touch screen with a stylus.  Your bad, Apple. The one thing you can't do, as an artist, on their wonderful tablet, is draw on it, unless you're into finger painting, or using a third-party stylus with a tip like a kid's crayon.  (OK, David Hockney has turned out some credible art on an iPad, but his style is not mine - I want a pencil stroke which gets broader and darker when I press harder - it doesn't seem too much to ask).  So yes, the iPad looks great, but I want it with a proper Wacom digitising screen & penabled pen, and a display that works under any lighting conditions.  Apple, please take note.

As far as I know, at the time of writing, there is one product which comes close - the Asus EP121 Eee Slate, a fully fledged Windows 7 tablet with a penabled display.  OK, it's not a 'view-anywhere' screen, and the battery life isn't anything to write home about, but I could compromise a bit, apart from one small detail - it costs close to £1000 in the UK, and I'm your average starving artist, so until Asus kindly send me a review unit (hint), or I manage to raise some serious money to support my next project (watch this space!), I'll be doing without.

Given all the above, it is natural that I should cast about the far reaches in the internet occasionally, looking for an alternative, and so it was that I happened on this strange beast, the ea800 Eee Note, also made by Asus. (I also happened across the fabled NoteSlate, but it appears to be exactly that - fabled).

The Eee Note is well, basically, a notepad.  Imagine an A5 paper pad and a pen that just happens to be electonic, and you're getting the idea. No fancy colour screen - greyscale only. No media consumption (apart from e-books) though it does have a rear-facing camera and an MP3 player. No Flash video or Java, though it does have a rudimentary web-browser (and WiFi, not 3G).  Did i say, it is basically for taking notes?  You can write on it, and draw on it, and send the results via WiFi to the Evernote cloud application, and that's basically it. Oh, wait, no it's not - it's also an e-book reader (PDF and ePub format).  Others have written at length about the functionality, hardware and software (see below for links), so I'm not going into massive detail - what I'm interested in is whether it's a useful tool for artists...

At this point I can hear you asking "Why would I buy such a limited device, when the iPad and the Slate both have so much more functionality?"  The answers are two-fold and simple:  One, the A5 sized greyscale screen is a 512-level Wacom digitizer and the notepad function has two pressure-sensitive tools - pencil and fountain pen - see below for examples.  Two, the price - around £150 in the UK.  That's right - £150 for a pressure-sensitive electronic notebook.  Any questions?  Oh, by the way, don't expect to pick one up at PC-World. At the time of writing it appears to be available in Asus' native Taiwan only, though there are rumours of a launch in Italy - a bit of European test marketing perhaps?  Fortunately if you're dead set on aquiring one, enterprising distributors in Taiwan are selling them on ebay, which is where I got mine, with a (mostly) English firmware version. They even threw in a UK power adapter for the little USB charger.

So, where were we? Ah yes, questions. So here we go on the useful bit, useability for artists.  The general verdict is, could be better, as it definitely feels like a work in progress, but on the other hand, it is useable.

So that's pretty much it for writing. The last firmware upgrade added on a select/copy/paste function, so it seems they are still actively working on the functionality, which is great.

And so to drawing.  The notepad app. gives you 34 different background templates, but at the moment, the useful headings on a lot of them are still in Mandarin, which makes them pretty useless for gaijin. The writing examples above are on a standard ruled background, but for free drawng you can make the background blank. You can also change it at any time afterwards, though no way to upload your own.  Here we go....

So - even using the 'pencil' tool, it's pretty much like drawing with a ball-pen. If that suits your drawing style, great, but it's not what I'm used to. I find I'm using the Eee Note (after a few weeks of ownership) quite a lot for writing - day-to-day note-taking etc. - not so much for drawing.

So I have a wishlist for Asus. I'd really like to use the Eee note as a general purpose notebook and sketchpad, but the sketchbook bit isn't quite there yet. For me, what it needs is:
1. A better contrast screen with 64 grey levels ( or colour, of course, but that takes us into a whole new price bracket, and the point is, this thing is affordable). At the moment , with the present LCD, black on white is really grey on grey - it reminds me of the Apple Newton I had 15 years (or whatever) ago. Surely display technology has moved on since then?
2. A more 'natural' pencil tool. Vary both colour and stroke width with pressure, and add 'paper texture'. Make the variation much more continuously sensitive, and get it tested by lots of artists.
3. Give the eraser 'soft edges' and make it pressure sensitive in both size and opacity so it can be used as a drawing tool.
4. ... or just get the ArtRage folks to port their app to Linux!
5. ... and ... well, that's pretty much it, really. The rest is just bells and whistles. What counts for me is whether it works as a notebook, pure and simple.

Conclusion - the Asus Eee Note is good at what it does, and it only needs a couple of improvements to be great, from an artist's point of view. I will certainly continue to use it, and report back later. In the meantime, if Asus would like a working artist to beta-test the next generation version, I'm your man....

Other reviews:
Bit-Tech: http://www.bit-tech.net/hardware/mobile/2010/12/22/asus-eee-note-ea800/1
goodereader.com: http://www.youtube.com/watch?v=yPDYCUSUf4E
(Many links to other 'unboxing' videos on the right)
Eeenote.net: http://www.eeenote.net/
(Doesn't seem to have been updated for a while)

There is an SDK, and various people are working on new apps etc.  Google for Eee Note SDK and see what comes up, if you're technically minded.
Posted by Unknown at 10:11

Thanks for such a detailed review. It's on my wishlist but I'm thinking I should perhaps hold off as I know a Wacom Bamboo is on the way. I find I'm doodling on my little phone & thought the ASUS might just be good for those moments when you don't want to read. It caught my eye as I'm an asus PC user and I was sourcing an eReader for my daughter. It's a case of wait or jump in for me & still deciding. Do you think they'll release a colour version in the wake of the Kindle Fire?

Hi, thanks Suzanne. Don't know about a colour version - it's aimed at students and they want to keep the price down, I guess. A colour version would need backlight, and that would mean a redesign and killing the batery life. My guess is they will stick with greyscale until the colour display technology improves, but it's only a guess :-)

I know that it has been over a year since you reviewed this but I found something which might interest you.

It's the Adonit Jot Touch. http://adonit.net/product/jot-touch/

According to this page: http://adonit.net/product/jot-ready-apps/, it is supported by ArtRage.

Thanks Nolan ... yes, I was thinking about this ... not sure I'd get on with that disk, but I just decided when I have time I'll try the cheap (non-pressure) version on a normal Android tablet and see how I get on with it. If it works then I guess an iPad becomes a viable option ...

I'm now selling the ea800 I reviewed here - please see the top of the article for the link to eBay.

My wife Vivi-Mari's blog about our art and life together ... now available in English!!